In last night’s chapel, Darla talked about our Creator and how He came to our rescue.  When Adam and Eve disobeyed God, that meant that all of Creation needed a savior.  We were separated from God because of Sin, but our Creator (whose name is JESUS) became human and died to save us.  God loves us and invites us to say YES! to Jesus.

On to day three of Super Kids 4!  Campers woke up today to Polar Dip, clean their cabins, and gather for Flag Raising and breakfast.  Then it was time for Morning Chapel with Darla.  This morning, Darla talked about how we are Alive in the Creator. 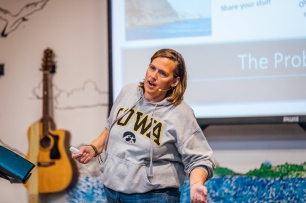 After Morning Chapel, campers had some Free Time & Cabin Adventure before lunch time.  Today’s lunch was nachos in a boat, where campers could choose their own nacho toppings.  After lunch, we saw another skit from the summer-long characters, who were up to  more hilarious antics.  Then campers went back to their cabins to get today’s mail and have some Toes-Up Time before the big game. Today’s game is Clue, which is basically a live-action version of the classic board game.  Staff play different characters, scattered all over camp.  Cabins work together as a team to travel between the different characters and solve the mystery based on the answers each staff member has to their questions.  It’s a really fun way to kick-off Free Time!

TAKE CAMP HOME:  Ask your camper about the game of Clue.  What were some of the characters they interacted with during the game?  What was the mystery, and did they find out what happened?

Free Time usually opens up swimming, zipline, and laser tag, but today we had a bit of a rain storm as the afternoon began.  Campers broke out their umbrellas and rain jackets, and some just enjoyed puddle jumping and playing in the rain.  After we hadn’t heard thunder for a while, the beach and zipline opened up again.  Campers who missed their laser tag slot will be able to reschedule for later during evening Free Time. 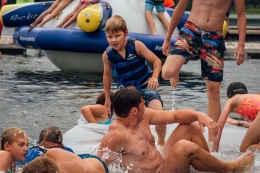 After Free Time, we gathered for Flag Lowering and dinner line-up!  Tonight we had burgers, fries, and chocolate malts!  Right after dinner, it was time for the Carnival!  The Camp Lebanon Carnival is a really fun event for campers to play games run by staff, eat cotton candy, listen to fun music, and earn tickets to pay for dunking their counselor in the dunk tank!