Last night, campers had tons of fun at our epic Super Kids Carnival!  We had carnival games, popcorn, loud music, and even a dunk tank!  Campers got to play games to win tickets, which they could then use to bring their counselor (or another staff member) to the dunk tank, for a chance to throw a ball and dunk the counselor in a large tank of chilly water.  Aside from the games, there was also a slip ‘n’ slide on the field for campers to enjoy over and over again!

In Tuesday night’s chapel, Jackson told campers about the Creator’s plan.  First, campers were introduced to the problem – God’s Creation, US, needed a Savior!  Jesus became a human and showed that He had power over Creation (because He was the Creator!), and then He died to save us on the Cross.  Jackson shared his own testimony of coming to follow Jesus.  The good news of Jesus is called “The Gospel,” and campers were reminded that God loves them and is inviting them to say “YES!” to Jesus!

TAKE CAMP HOME:  Talk to your camper about Jesus, our Creator.  Can they tell you the story of what happened after God created Adam and Eve and put them in the Garden of Eden.  Read the story together (Genesis 1-3).  Then talk about why we needed a rescue plan.  Ask your camper how God showed us that He loved us – what was His plan? 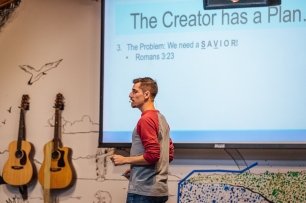 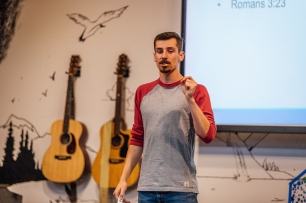 This morning, campers woke up and some went to Polar Dip, before Flag Raising and Breakfast.  Today, we had french toast sticks, sausage, fruit, and oatmeal for breakfast.  Campers went back to their cabins to clean-up before heading in to Morning Chapel, where they sang more camp songs.  Then it was time for the morning Free Time and Cabin Adventure time.  For the first part of the morning, campers get to enjoy some Free Time, with crafts, BB guns, and all of the Hub games like carpetball, 9-square, 4-square, and Octoball.  Then they group up into cabins for Cabin Adventure, where their counselor comes up with a fun activity to do as a cabin. 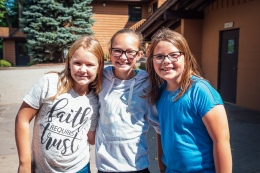 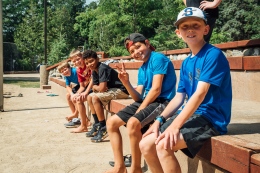 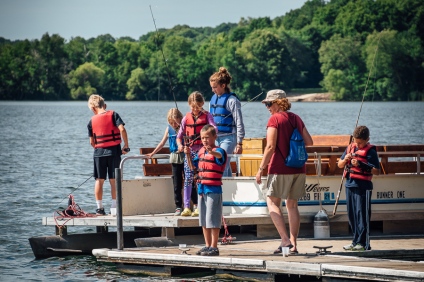 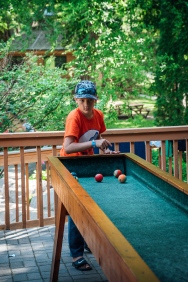 Then it was time for lunch.  We had ham & cheese sandwiches, tater tots, salad, and fruit.  Campers then headed inside for a special video skit, which continues the story of the summer-long characters.  Then it was time to go back to cabins to open mail and have some Toes-Up Time before Free Time! 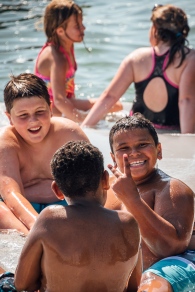 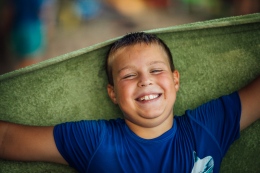 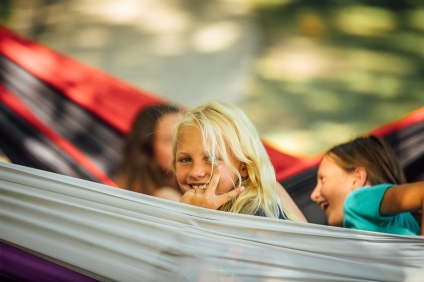 For Free Time today, campers swam, ziplined, laser tagged, and crafted!  For the 4-o’clock Option, some campers played Dodgeball on the sand volleyball court.  Then it was time for dinner – PIZZA NIGHT!  After dinner, we had our last Chapel with Jackson.  Tonight, he talked about how the Creator is still creating!

TAKE CAMP HOME:  Ask your camper to tell you about all the ways that God is still creating.  What are some of the things in Creation that make your camper excited?  Talk about the hope we have because of Jesus – because of Him we have Peace (God is in control), Help (God has the power), and Hope (God knows the future)!

After chapel, campers had a chance to run back to their cabins, put on some long pants and sweatshirts, get some bug spray, and get ready for the hike out to Bass Point for our Campfire!  First, they got some candy at the Canteen and played games on the Hub.  Then they all trekked out together.

We sang some fun camp songs (including the final round of Gorilla Gets the Man), heard another story from Jackson, and went on a Lion Hunt with Bobber Bill.  Tonight is the last night of summer camp for these campers, and they are sure going to have lots of fun together as they get ready for bed and have their last Cabin Devotions.  Parents arrive tomorrow for the Closing Rally!

To continue following the story of Camp all year long, follow us on Facebook, Instagram, and Twitter.  Don’t forget to download the Camp App for notifications and easy access to Summer Camp info!  Check your email inbox soon for an email with links to high quality photos from the week, the video of the week, and a PDF document with some discussion questions for talking to your camper about their week at Camp!