Junior High and Senior High weeks at Camp Lebanon are different from the rest of the weeks during the summer for many reasons.  ONE of those reasons is the epic Volleyball Tournament that we have half-way through the week!  Cabins compete against each other in a fun-filled evening of volleyball.  This tournament serves as a fun activity, but more importantly, it is an incredible tool for counselors and staff to encourage cabin unity.

Playing a game together builds teamwork and bonds cabins together.  Many times, while a cabin as a group might be experiencing some awkwardness or nervousness about building new relationships with their cabin mates at the beginning of the week, the Volleyball Tournament CAN be the moment when that turns around!  Counselors often point to the tournament as the first thing that really brought their cabin together.  Whether it is laughing over creating a team cheer, to collaborating on their team “uniform,” or cheering each other on as they compete, cabins develop connections with each other that last far beyond the final game of the tournament. 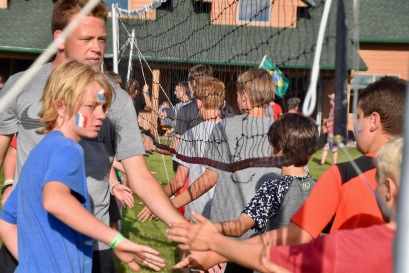 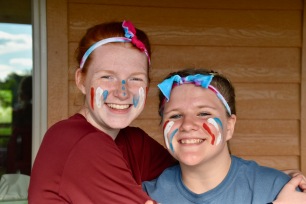 There are other staples of the Volleyball Tournament, including a trek up to the Eagle’s Nest for a picnic dinner beforehand, cotton candy or popcorn, 9-Square-in-the-Air, and sometimes even a slip-n-slide!  Campers play hard and, in between games, practice their volleyball skills, develop team cheers, or do team-building exercises with their counselor.

Competition is fun, and there is always a team that comes out on top in the end.  But even in the Volleyball Tournament, the team that has the most fun WINS!  And the team that grows closer because of the tournament wins lasting friendships and memories to carry with them forever!